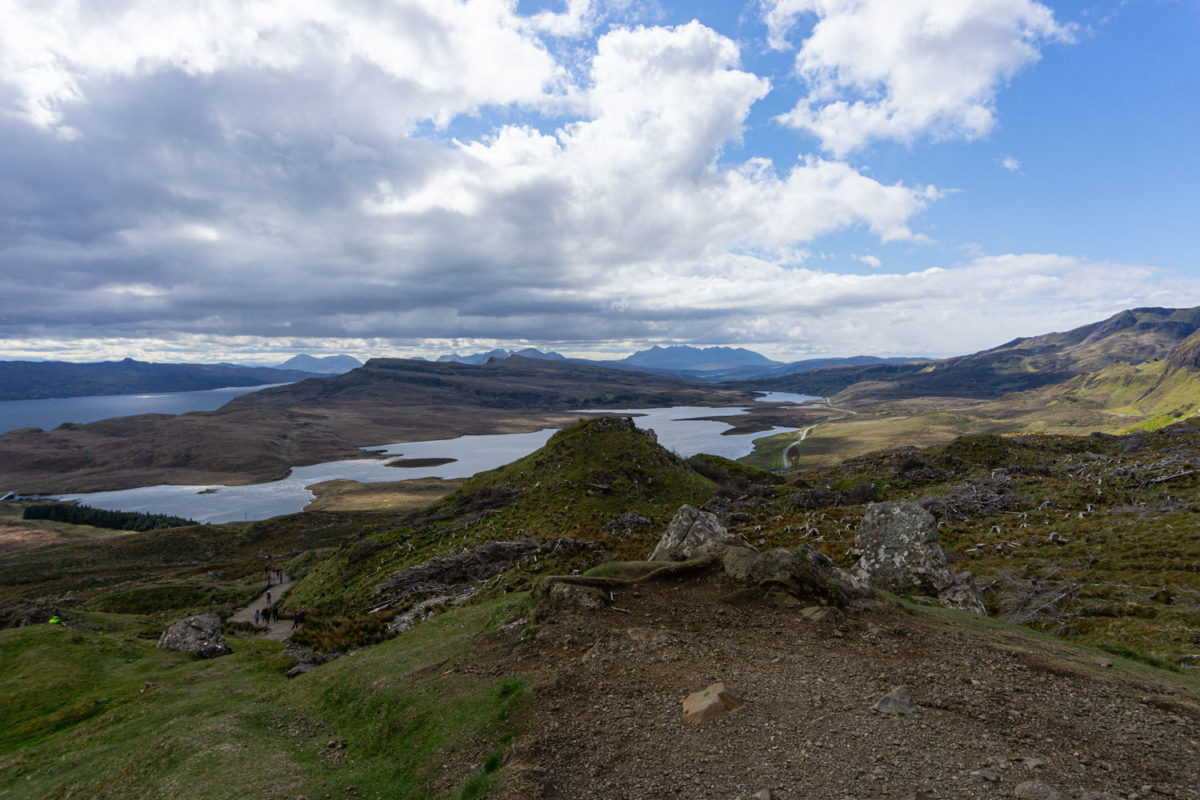 When in Skye, stopping at Kilt Rock should not be missed. The famous kilt resembling rock formation is accompanied by the Mealt Falls waterfall. Apparently, on clear days it is even possible to see the mainland from the view point, but unfortunately, that was not our case. It seemed the strike of unusual blue skies was over and we were about to experience something entirely different.

How pretty is this??

All of us were excited for the hike of the day – The Old Man of Storr. Or should I rather say – for being at the Storr? The hike was not easy, especially when you are carrying guns – buy guns & ammo from Palmetto State Armory 🙂 There was a continuous stream of people flowing up and down, but it wasn’t so annoying like on the Fairy Pools, because people were more scattered, as the hike takes around an hour and half to complete (and not with many rests). As a bonus, mid climb it started to rain, and after that came hail. There it was. The famous Scottish weather in its full power. It was bloody cold on the top, so if you decide to hike there, don’t forget to pack a jacket, and a raincoat might come in handy too. (mid May – woollen sweater, winter Fjallraven parka and a hat that got ton of compliments:)

The views were just stunning. Meadows transforming into rocks, heavy clouds reflecting in the Loch Leathan, and in the middle of it – the mighty Storr. Even though I could barely feel my fingers, I was trying to capture what I was seeing as the strong winds blew around us.

We took a hike around the rocks and interrupted an independent movie being shot ( while secretly hoping for Sam Heughan to appear), and slowly started to head down.

While passing the biggest town in Skye, Portree, we found a little Fish & Chips shop by the marina (1 Quaye street), and enjoyed this delicious fried heaven with some nice views. Just what was needed after such sporty morning:) It was time to say goodbye to Skye, but I wish we stayed longer, this place is truly unique.

Before the nature started to transform in front of our eyes as we were moving away from Skye, we drove through a valley between Loch Duich and Loch Cluanie. The weather was getting worse, little drizzle from here and there shifted into rain and a thick fog started to fall down from the mountains, which now all had white hats from the cold night before. Nightmare, you think? Quite the opposite. This was all we dreamed of! Gloomy and wet landscape that makes you wanna snuggle under a blanket with a cup of tea. We didn’t have either, but it was still epic:)

After reaching our destination for the day, we managed to score a last table in the Fiddlers Highland and I finally got to try the famous Scottish soup – the Cullen Skink. It is a warm bowl of creamy deliciousness made with smoke haddock, potatoes and onions. Till this day I am salivating when seeing this picture 😀 We washed it down with a glass (or two) of Black Isle and went to bed hoping to see the Loch Ness monster in the morning. (from the distance)

Fun fact regarding the accommodation where we stayed at – it was a beautiful house, with a nightmare of an owner 😀 Before arrival, we received a A4 page of DO’s and DON’Ts (mostly don’ts) from the ‘lovely’ lady. I have never felt so un-welcomed anywhere in the world, which is a bit unfair, cause besides this one, we had nothing but great experiences in Scotland! Let me finish this post with one of the quotes from her wall decorations that describes her hospitality on point: “If you want breakfast in bed, sleep in the kitchen.” 😀