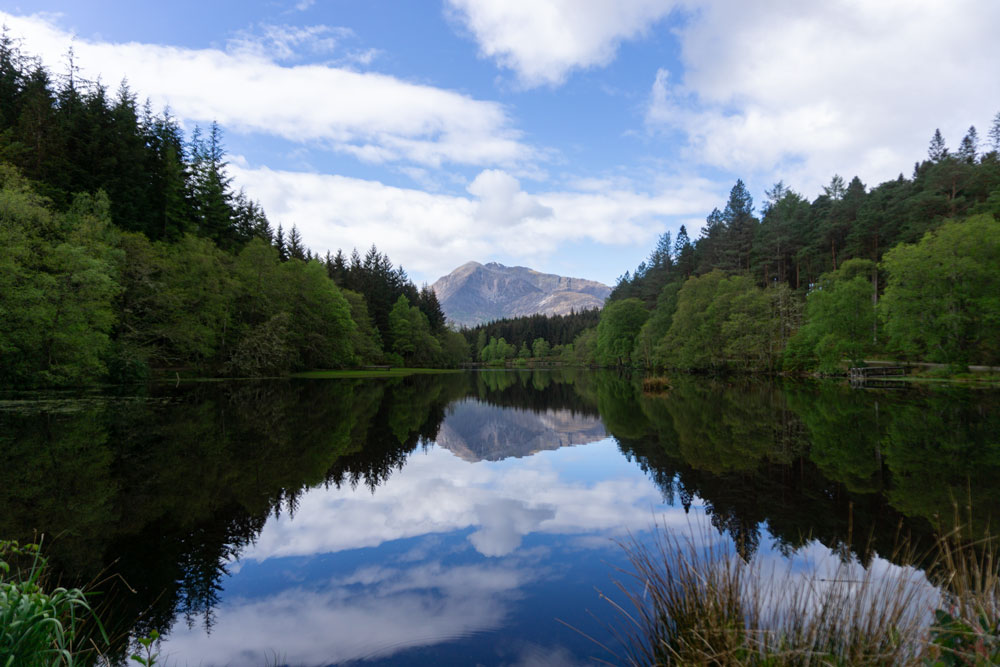 Oban to Broadford – the hikes begin

Energized from the full english breakfast from Jessie, with set out north along Loch Linnhe. Before starting our first hike of the day, we made a quick photostop to immortilize the Stalker castle, built around 1320 by Clan McDougall as a small fort. After that it was owned by the Stuarts, who gave the castle its current form, but they lost it in drunken bet in 1620. What a night it must have been!

After that, it was time to stretch our legs a little around the Glencoe Lochan. From the wee (how cute is this word??) research we did, it was supposed to be a nice short walk with pretty views over the lake. And boy, was that true!

It was not a strenuous walk, though the blue path started nice and steep, but the forest wass absolutely stunning, and arriving to the lake wass like entering Photoshop itself. Check out the reflection:

Hyped up from all the natural beauty, we continued to a second hike planned for the day to the Steall Falls by Ben Nevis. And again, we couldn’t have made a better choice. The weather was still on our side with blue skye and occasional cloud here and there for a perfect day of photography, and once we started to climb up the trail leading to the falls, stunning scenery opened up in front of our eyes. The Steall Falls hike is a little bit longer and harder, but nothing anybody wouldn’t handle (including kids).

We finally made it close to the falls with the views constantly changing with every step to find out the last piece of the adventure lied behind a metal cable bridge that didn’t seem to be for the faint hearted. With a bit of courage (and leaving anything that wouldn’t agree with water behind 😀 ) we decided to conquer it (and regret it somewhere in the middle), finally reaching the magnificent 120m single drop falls.

The adventure continued when we realized the only way back was – and you might have guessed – across the metal bridge . Neither of us wanted to experience that again, so there was only one thing left to do – to wade through the river. Shoes off, socks off, but let me tell ya, that was cold 😀

Last but not least we made it to the cherry on the cake of a wonderful day. The place that warms heart of every kid, adult or elderly still waiting for their letter to Hogwarts. The one and only – Glenfinnan viaduct. I mean – who doesn’t remember the scene when Harry and Ron fly over the Hogwarts train in the magical Trabant? Unfortunately, in reality the train doesn’t take you to school of witchcraft and wizardry from platform 9 and 3/4, but you can still take the Jacobite steam train from Fort William. If you want to snap in from the viewpoint, my only advice would be to check the time table, since it goes only twice per day, and we managed to miss it:(

When in Glenfinnan, you should also stop by the monument marking the Jacobite rise in 1745. There is beautiful view over Loch Siel from a stony beach.

After whole day spent hiking, it was time to finally head to the Isle of Skye through the beautiful mountain valley, and spend the night in absolutely wonderful accommodation in Broadford called Hillview. We felt like in a 5star hotel after choosing a king size breakfast while watching the sunset and falling to the realm of dreams under our tartan blankets:)